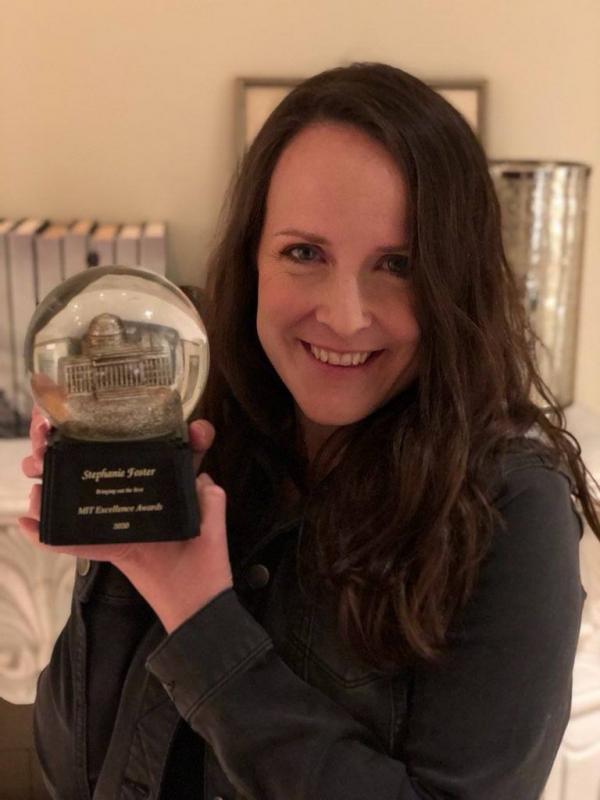 The next award for Bringing Out the Best goes to Stephanie Foster. Steph is a member of the Technical Staff in the Humanitarian Assistance and Disaster Relief Systems Group at MIT Lincoln Laboratory ... where she is the lead developer and program manager for the Next-Generation Incident Command System.

The platform allows first responders to collaborate and coordinate in real time, in the most dire disaster situations. For the past 8 years, Steph has worked with the Next-Generation Incident Command team to create a tool that provides critical information to first responders. It’s a tool with such transformational impact that it has been adopted by many first-responder communities around the world.

Four years ago, officials from NATO’s Science for Peace and Security Programme reached out with a new challenge for the team. They wanted to find a way to do two complicated things:

With additional support from the Department of Homeland Security, Steph took on this demanding but vital mission. She leads not just the MIT Lincoln Laboratory team, but coordinates teams across Bosnia and Herzegovina, Croatia, Montenegro, and North Macedonia.

The team has worked hard and became a cohesive group. And to keep the work moving forward, Stephanie is happy to help with whatever they need to reach their goals.

One nominator wrote, “She solves what needs to be solved, whether that means setting-up servers into the wee hours of the morning, or physically setting up for… an international disaster response field exercise, all with a smile on her face. Having a leader who is capable of big picture thinking, but who sees herself as a team-member, and is willing to do what needs to be done, is incredibly inspiring to those of us who get to work with Steph.”

That’s a feat worth celebrating. Congratulations, Steph, on your Excellence Award.