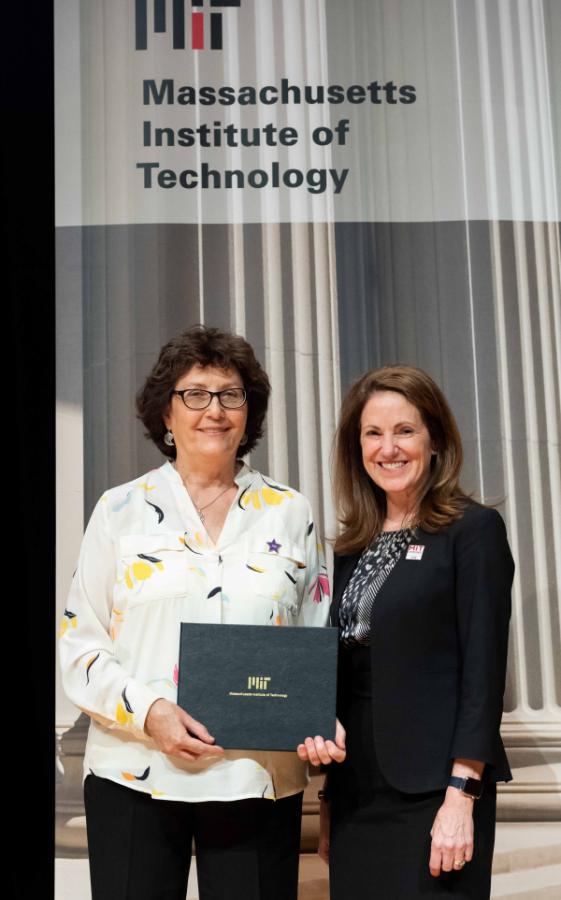 Elizabeth DeRienzo receives a Bringing out the Best award from Chancellor Cynthia Barnhart.

Our next award for Bringing out the Best goes to Elizabeth DeRienzo, Publication Manager for MIT Open Courseware—MIT’s online digital learning platform visited by millions of people worldwide each year. Elizabeth has made pivotal contributions to that remarkable open learning experience.

Her colleagues say that she is a quietly effective leader, a deft manager, a kind and caring colleague, an outside-the-box thinker, a proactive problem solver, a treasured mentor, role model, and patient teacher who gives so much of herself and who brings out the best in everyone on her team.

Many colleagues gave heartfelt accounts of Elizabeth’s dedication to mentoring. One coworker wrote: “In my 17 years at the Institute I have connected with many younger colleagues who have been part of Elizabeth’s team and who have built their own careers at MIT, making many significant contributions to MIT’s open learning mission. Today, there is an entire generation of Open Courseware staff who have benefited from her leadership and mentorship.”

Another wrote, “Although there was no clear path for advancement in my role, Elizabeth created an entirely new position to give me an opportunity to learn new skills. That enabled me to take on a management role, and a year later, with this new experience, I was able to move into a higher position. I would not be where I am in my career today without Elizabeth. And I am now inspired to think creatively about the career paths of those who report to me.”

Finally, before we bring Elizabeth up here, I’d like to quote one last colleague: “What a wonderful thing Elizabeth has done for MIT—bringing out the best in so many learners around the globe.”