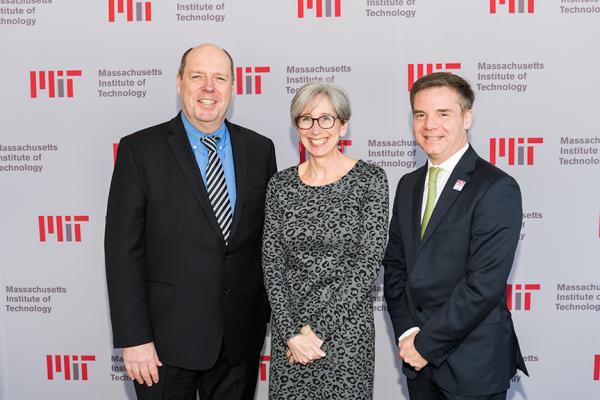 2017 MIT Excellence Awards + Collier Medal ceremony
Our next recipient is Tina Gilman, AFFOA Director of Administration and Membership in Research.

Her colleagues tell how Tina took the lead administrative role in MIT’s bid for a national manufacturing initiative aimed at revolutionizing the fabric industry. She helped organize, structure, strategize, and position MIT in the hopes of winning this highly competitive program that had actually been targeted for another university.

The task at hand was huge, but in an impossibly short time frame, Tina skillfully corralled leaders from 32 major universities and 52 companies to produce a 300-page proposal. It powerfully described how MIT scientists would transform fabric, as we know it, to benefit society and advance the industry. Well, spoiler alert: against the odds, MIT won this $300 million-dollar contract.

One of Tina’s colleagues wrote: “Occasionally, we are fortunate enough to encounter a person whose energy, devotion to her job, and unrelenting efforts transcend the bounds of an organization—Tina Gilman is that person.”

Tina, congratulations on your Excellence award!